The early days of comparison websites. 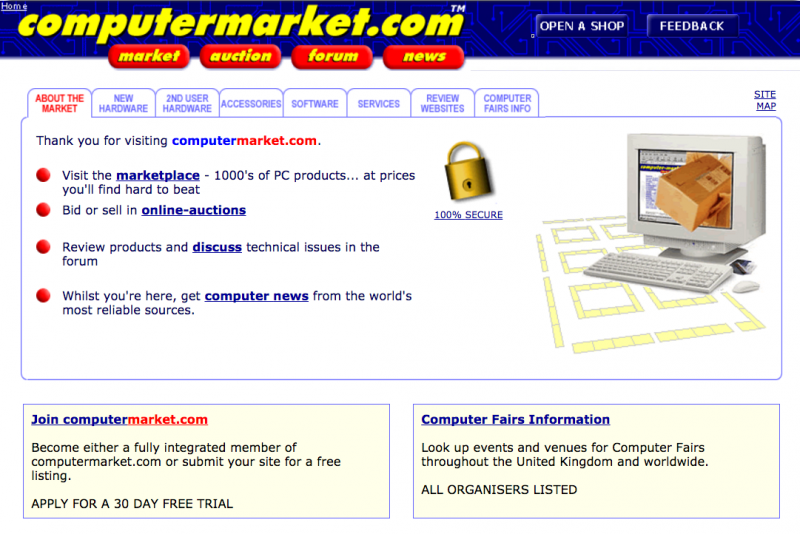 ComputerMarket.com was one of the world's first online comparison sites which operated around the time of the dot-com boom of the new millennium.

It was owned by British Computer Fairs which was a tech-focused event producer which organised weekend computer fairs in London and the South East.

Paul Driver was the founder of BCF and he now operates a successful web design business called easable which is based in Ilkley, West Yorkshire.

The internet was already attracting lots of attention and online shopping was only just starting to be taken seriously and it was then that Paul Driver saw an opportunity to build an online computer fair.

The idea of online shopping malls was not new, but those that already existed were no more than a graphical street scene which linked to various online shops. Driver wanted people to be able to compare prices of identical products, side by side, in a competitive and open marketplace.

Back then, this was not easy to do on the internet. Search engines were not as clever as they are today and eBay was an auction only platform, where it was not easy to compare finishing prices

In the real world, however, this was happening every weekend at computer fairs and in tech-dominated shopping districts such as London's Tottenham Court Road.

BCF was at the centre of a large community of buyers and sellers and was already pretty active on the internet. In other words, perfectly placed to launch such a venture.

Actinic Software were early pioneers of online shopping and had already developed some basic software for selling online. It turned out that they were also developing another product called Portal Builder and used together, it was possible to build a searchable online shopping mall.

After a prolonged development stage, computermarket.com was launched, with many of BCF computer fair traders taking part.

Many of the computermarket.com traders had their own shops or mail order businesses, whilst some worked for themselves as system builders, repair shops or software experts. Trading at the fairs was very lucrative for these businesses and by booking tables at the fairs, they would often speak to more potential customers in a day than they otherwise might see all year.

For computermarket.com visitors, their guarantee of big savings arrived from the keen competition between traders. So whether visitors were in the market for a high-performance laptop, a fast gaming PC or low-cost second-user machine, they were always sure to find a bargain.

Paul Driver said, "From the beginning, a great deal of emphasis was placed in consumer confidence, and big efforts were made to educate visitors that their rights when buying online were exactly the same as if they were buying from a shop".

In the end, computermarket.com struggled to find a business model which worked and in many respects may have been too early to the marketplace. After three years operation, a decision was made to close the site down.

Tell us about your project and we'll get back to you with some bright ideas and suggestions.